Advantages of the Burgess Edge

The Future of Edgebanding

The invention is a matched pair of router bits, which makes the onerous task of edgebanding plywood quicker, easier and less expensive for the following reasons.
• This method is inexpensive, requiring only a pair of router bits rather than a dedicated machine. Edgebanding machines run into the thousands of dollars while these bits sell for under $200.00.
• This method uses real wood so that the edge of the plywood can match, in species and color, the wood being used in other places, such as the face frame of the cabinet.
• The Burgess Edge uses wood that is normally scrapped ripping for the infill, so the additional expense for material can be minimized.
• The cabinetmaker does not need to keep of edgebanding in multiple species in stock, taking up space and locking up capital. He/she avoids the inconvenience and delay associated with ordering supplies.
• The design of the router bits allows for different thicknesses in plywood, and various edge treatments.
• Because the bearings follow both the top and bottom of the plywood, the veneer that is not cut out by the bit can approach a knife-edge, resulting in a finished appearance that resembles the edge of a natural board.
• The mating of the plywood and the matching insert is self-aligning.
• The shapes given to the mating surfaces increases the bonding area and thus creates a stronger edgeband.
• The plywood veneer overlaps the infill on the edge so that the face of the plywood does not appear to be banded. This also protects the edgebanding from catching and being pulled loose. 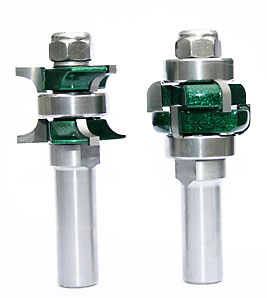